In 3DE, the Classic and the Radial Lens Distortion (LD) models are almost the same.

The Distortion is actually a second order quadratic x 2. The degree 4 Quartic is fourth order x4

These gross parameters are identical in the two models. Type in some values, you'll see.

The difference between Classic and Radial is that the Radial allows the distortion to be different on the left or right side of the frame, asymmetrical. This is powerful, but can get you into trouble with wild, implausible distortions. Often with a zoom lens, LCO (Lens Centre Offset) is much more useful, especially for stereo.

When you click the Adjust buttons, it is usually best to not check every button at one time. Start off with the Degree 2 and the Degree 4, Adjust and then check that the undistort is plausible. The F3 view will unwrap the image in real time OpenGL, so you can see whether you are close. Then uncheck the Distortion 2 and the Quartic and check the other three or four parameters, which are fine tunes of the gross settings.

There are different strategies for determining lens distortion and you can mix and match. Usually I start with a lens grid and a matrix, determine rough distortion and then fine tune using th 2D points that I've tracked for the final. You adjust the distortion so that the Deviation error of the solve is lowest, while still being plausible, i.e. the distortion is getting more rectilinear, not less.

If there is only one valid straight edge in a plate, the Matrix may or may not have enough data contained. But the totality of all of the 2D points contains enough information to Calc a very useful undistort.

The Brute Force is very slow, but it tries every single possible combination, which can be more accurate. Adaptive is fast and looks for "trends", but can choose implausible solutions and go down the rabbit hole. Generally you don't want to Calc for more than three parameters at a time.

If a shot is fairly simple, don't waste time with LCO. But for stereo with a zoom lens, the Radial model can get lost and create a very different, asymmetrical distortion for left/right eyes, so LCO is very good for zoom shots with tight LIDAR lineup needed.

So there are four methods for determining distortion, which can be combined in a non-linear workflow:

Of course with the new Lineup window, you should even need to check anything in Maya, fine alignment should be visible in 3DE F5. Notice that for a dense LIDAR, 3DE has the very useful hidden line removal, not generally available in Maya, unless you use the Mental Ray Contour function for software render.

Also, the Anamorphic Squeeze parameter has nothing to do with a Cinemascope/Panavision lens with a non square pixel aspect ratio of two. So this value on a spherical or anamorphic lens will often be around 1.

FYI, here are the distortion parameters available in the big four tracking softwares. 3DE has the largest number of adjustments, although with great power comes great responsibility, i.e. the extra parameters are very useful for difficult shots, but can be confusing.

All have LCO adjustments as well.

Theoretically the Brownian/Newton values in 3DE and pfTrack should be the same, but they do not give identical values. So pfTrack needs the pfBarrel node in Nuke and 3DE needs the WETA/3DE undistort node in Nuke. There is also a SynthEyes undistort node available for Nuke. 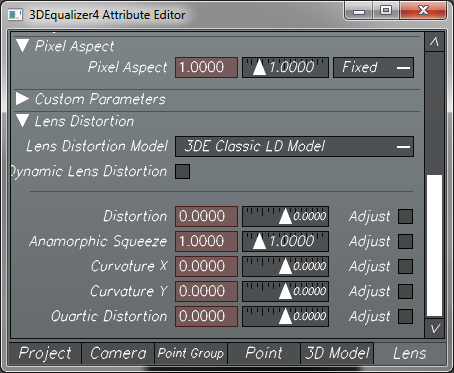 The angled "Modern" grid will determine focal length, but it typically has a high deviation error.

So the "Classic" straight grid is often better, according to Rolf.

In the old days before the Matrix, the grid would need to be positioned exactly parallel to the camera, which is almost impossible to do in practice, outside a laboratory.

But with a "straight" Matrix, theoretically the grid can be keystoned slightly away from parallel and still give great results, much better and easier than the old fashioned traditional grid, without a Matrix. But again, only an angled grid will determine focal length.

But for focal length, there are other issues. An angled Matrix shot will require the grid to be placed very close to the camera and the focus setting will be wrong. A plate is usually shot at about ten feet away, but because the printed grid is small, the grid shot usually has to be focused at a distance of about 2 feet. Thus, the calculated FOV is off slightly, because of lens breathing. So I like to stop the camera down to t/16, focus at the "correct" 10 foot distance and let depth of field keep the image sharp. And with an angled grid, there are often checkerboard squares that aren't even covered at the edge of frame, or are too small or out of focus to Matrix accurately.

The other methods of determining focal length still work. If you have accurate LIDAR in F5 Lineup, you can "Hitchcock zoom" the focal length and low order distortion. Or you can do a Fine Adjust of focal length, etc., in the Parameter Adjustment window, as always.